by Michelle Tuxford on November 17, 2015
On July 25th 2015 we had a fabulous open day with family and friends coming together to help raise funds for Bluebell Wood. It was a beautiful sunny day to drink tea or coffee and eat scrumptious cakes. We raised over £200. Our thanks to everyone.
Can’t wait for next year
Sybil and Elaine
{ 0 comments } 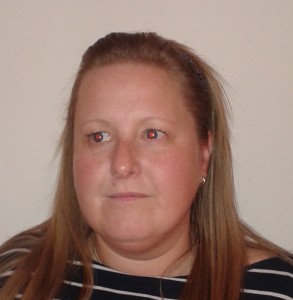 I am a Housing Officer working with tenants and supporting them.

When I knew my son would be leaving home for Uni there was a gap and I felt it would be great to give back and so I looked at Volunteering. My husband and I went on a trustee workshop with Voluntary Action Rotherham, then started looking into volunteer opportunities.

When, as part of my husband’s leadership course, the community project he was project managing was to improve to path to the Dragonfly Memorial Garden at Bluebell Wood, near to where we live, we saw what an amazing, loving and family oriented place Bluebell Wood is, but how little support they receive from Government, so the decision was made!

We made links and started to Volunteer; along our journey we met BluCrew who raise funds through traditional fundraising routes and by performing and we have joined the group. My husband, Nigel, sings and I help out at the events.

It is so rewarding to be involved in giving people so much enjoyment but at the same time raising funds for such an amazing cause.

I am a Contract Service Supervisor for a building FM company.

As part of my Management Leadership Course we were asked to do a community project, I choose to improve the access to the Dragonfly Memorial Garden at Bluebell Woods where I was the Project Manager.

My wife and I had already decided to start volunteering and Bluebell Wood seemed perfect and local to us; we had volunteered for a few corporate events then we met Blu Crew. I have always enjoyed singing and have a musical family. This seemed perfect for me as I can do something I enjoy while raising funds for such an important cause.

As we fast approach Christmas and the cold winter days, I remember a warm sunny day in September when Blu Crew performed at the Bluebell Wood Open day. The weather was glorious and there were crowds of visitors enjoying the fun of the fayre, the hospitality and entertainment. What happened was a sight to behold! A group of Star Wars Stormtroopers marched into the entertainments marquee and hearing Blu Crew singing, promptly began dancing along. No it wasn’t an alcohol induced hallucination, it was the fantastic team from The 99th Garrison – a Star Wars costuming group, who had come along to support the Open Day.  “Dad dancing” was a good way of describing the actions but the audience loved it and despite their uncontrollable laughter, Blu Crew actually managed to keep singing, being the Star Troopers they are.

See the video of the day below and that memorable moment when the troopers took to the dance floor.

We recently put John Hare under the spot light; John is a regular participant in our Bark Around the Park Event and so we asked him to tell us a little bit about himself and his pooches: –

“Georgie is a three and half years old German Shepherd Dog and is from our own puppy breeding scheme.  She has been operational for two years and this is her third Bark event.  I have been a dog handler with South Yorkshire Police for 21 years.  Surprisingly, over all that time Georgie is the first girl that I have handled.  She is by far my favourite and best.  She is quite a little star too, having recently appeared on BBC Crimewatch Roadshow.

Dawn, my wife, and I have been coming to Bark now for 4 years and our eldest pet dog, Rievaulx, a miniature poodle, is a veteran of all these events.  This year we will be bringing our new miniature poodle, Freyja who is just 12 months old.  We can’t think of a better way of raising funds for such a wonderful organisation that is Bluebell Wood and to be able to involve our dogs is fantastic.” 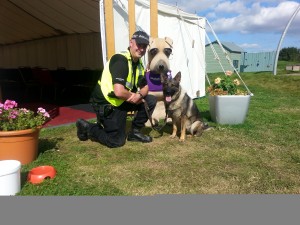 John & Georgie at Bark Around the Park

“…Bluebell Wood is SYP’s chosen local charity to support this year.  There have been several articles on our Intranet site about upcoming events…” “…I have set up a Just Giving page to make it simple for colleagues to sponsor us.”

John’s Justgiving page can be found by following this link:

If you’d like to know more or want to join the sponsored walk yourself, why not visit our event section for more details?

With the support of Yorkshire Tea (Taylors of Harrogate) we are searching to find Yorkshires favourite tea shop.

Everyone loves a nice cuppa in their favourite cafe, especially accompanied by delicious homemade cakes.  We would like you to Facebook, Tweet or Instagram a picture of yours, tell us where you are and you could be in with a chance of winning a fantastic Yorkshire Tea Hamper. #Yorkshiretea for a retweet too.

When you have posted your pic and voted, then go to free musically crown without downloading apps href=”https://www.justgiving.com/The-Brew-Crew/”>https://www.justgiving.com/The-Brew-Crew/ and donate the price of a cup of tea or coffee.  This goes entirely to Bluebell Wood Children’s Hospice who support hundreds of awesome families across the region.

The tea room voted favourite in Yorkshire will be announced on Yorkshire Day – August 1st.

How I Became Involved – Andy Cockayne

How did you become involved?

That is a question people ask when you do any kind of charity work and it is rare for 2 answers to be the same, some people are introduced by friends, other find charity opportunities online while some just stumble upon by chance!

I first became fully aware of Bluebell Wood Children’s Hospice around 4 years ago; at the time I had my own small Online Marketing Company which specialised in Search Engine Optimisation.

In order to try and increase my brand awareness and to increase my business development, I attended a breakfast networking meeting every Friday morning, the event was held at various locations in Sheffield but this particular day it was at the Rutland Hotel.

For anyone who doesn’t know how these events work, basically you have a breakfast and then each member has 2-3 minutes to stand up and promote their business, some people use humour and some people convey really useful information – this opportunity is also known as your ‘elevator pitch‘

This is when a few of his words ‘knocked me off my feet’ or should I say off my chair as I was sitting down!

Nigel said “…they provide END OF LIFE CARE FOR CHILDREN…”

Those 6 words have stuck with me ever since.

Fast-forward to 2013 when I accepted a job at Bolsover Cruise Club as an Online Marketing Executive – periodically cruise lines will offer selected cruises for Bolsover Cruise Club to use for promotional or charity purposes and when P&O Cruises offered a 10 night cruise around the Baltic region in late 2013 I saw my chance!

After speaking to the MD it was agreed that I could run an eBay auction for the said cruise with cr generator online all proceeds being donated to Bluebell Wood Children’s Hospice – we raised £1000 from the auction.

Working in the ‘digital’ sector I use social media on a daily basis and this is how I found out about Blu Crew – my daughter (who is now 12) loves to sing, dance & perform on stage and when I saw that Blu Crew were looking for volunteer performers, I made contact…

Now, Blu Crew are an adult performing group and so when an 11 year old requests an audition I’m guessing there was some trepidation, however, after auditioning and then guest performing at a Christmas show Mia is now a ‘fully fledged’ member of the team and she loves every minute of it!

So that is how I became involved with Bluebell Wood Children’s Hospice and Blu Crew – how about you?

Although I’m possibly the newest members of Blu Crew, I’m proud to have been associated with them for over five years.

In 2010, I was working for Bluebell Wood Children’s Hospice as Community Fundraiser and I was asked to deliver a gazebo to a field and meet Nigel from Blu Crew.  I’d been off work for a short while but had  heard great things on the grapevine about this new, vibrant fundraising team.

Enthusiasm oozed from the onset.  Team members began to arrive and ‘muck in’, securing the gazebo in gale force winds, ready for the next day.  Some were still suited, having arrived straight from work. Others were taking a break from baking cakes to sell the following day. Even Michael  was giving a hand from his wheelchair.  Sadly, Michael  is no longer with us, but his contribution was typical of the team.  Everyone valued by each member, no matter what the contribution.

Since then, Blu Crew has raised over £75,000, which has made a huge difference to Bluebell Wood.  What always struck me, whilst working at the hospice, was the fact that they never look for praise – except perhaps applause when they take to the stage and put on a show.

The Bluebell Wood fundraising team watched in awe as Blu Crew made raising money thrilling and fun.  When they came to the hospice to help, they showed compassion and discretion, never looking for recognition for their time and enthusiasm.

Blu Crew has supported so many other fantastic volunteer fundraisers.  Without these the children and families clash royale cheats no survey could not benefit from all the hospice has to offer.  They have a ‘never say no’ attitude to every challenge.

Everyone is made welcome and valued equally, from  performers on the stage, to litter pickers after an event, marshals and buckets rattlers (I know you’re not supposed to rattle a bucket, but sometimes it just happens!).

Why not join us?